Okay… so Harvard Business Review has a great article about compensation up here. In it, Dave Smith (Chief Product Officer at Payscale) points out that most people believe they are underpaid… and that even employees paid above market believe they’re underpaid more than a third of the time. Check out the below chart (from the article): 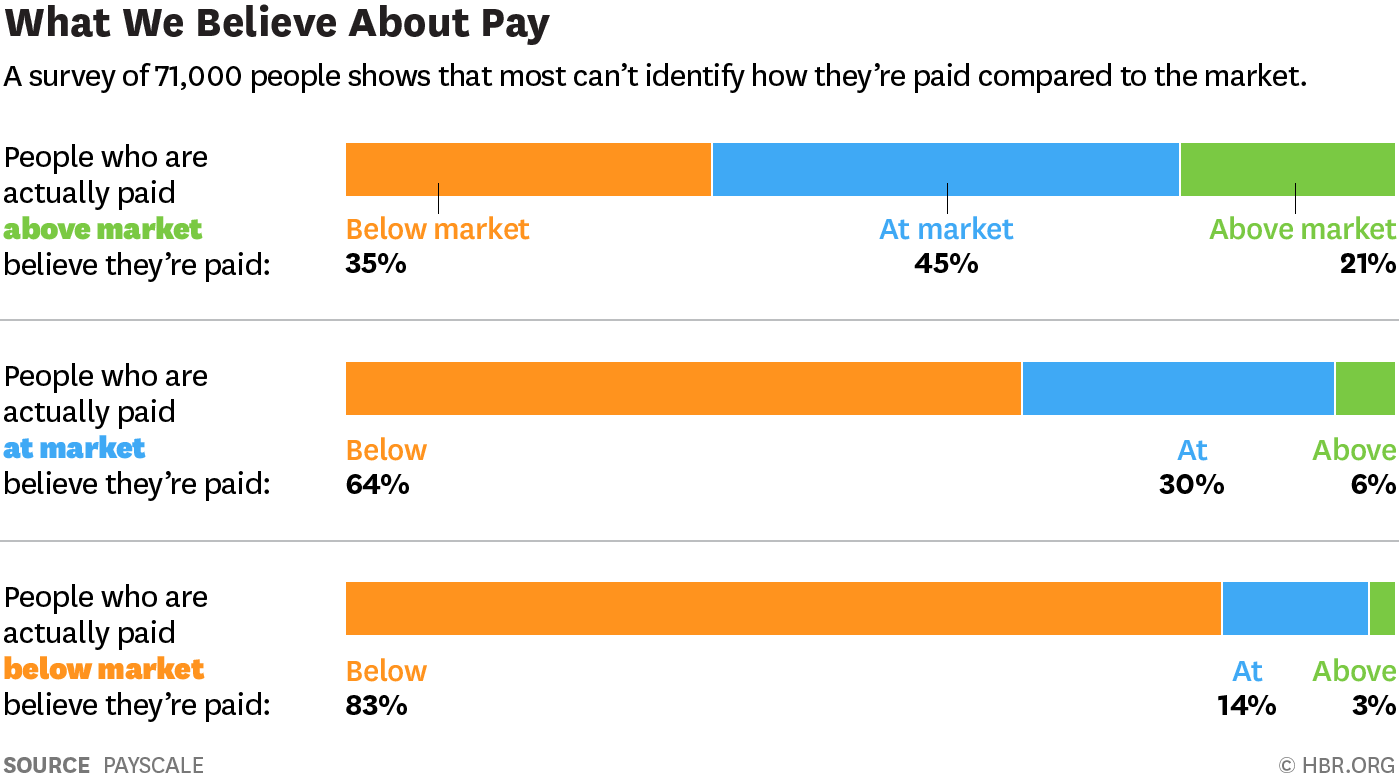 ^So what we see here is that only people that are paid below market have an accurate handle on their compensation. But why is this important, you ask? From the piece:

…perceptions about pay play a significant role in an employee’s desire to leave your company. This may sound obvious, but our survey showed that “intent to leave” decreased in relation to how favorable an employee felt about their pay. For example, 60% of employees who perceived they were underpaid said they intended to leave, compared to only 39% of those who perceived they were overpaid. The bottom line is this: if you don’t communicate to your employees that they are being paid fairly compared to their talent market, they may leave.

We also found that this type of communication becomes even more vital in any position that pays more than $85,000 per year — so the intent to leave tends to be more pronounced for professionals who are paid over this amount.

…if an employer pays lower than the market average for a position, but communicates clearly about the reasons for the smaller paycheck, 82% of employees we surveyed still felt satisfied with their work.

^Okay, so we know three things:

Given the above, what’s the argument for shying away from pay transparency again? I have heard several, but think that ultimately communication around the value of a total comp package to employees has to be table stakes. Actually, I would take it a step further on focus on delivering total rewards statements. Companies should be communicating to their employees the total value of their comp packages – total cash, yes… but also retirement income, active healthcare, active welfare, and PTO. And I’m not saying that this means publishing all colleague salaries, supplementary executive benefits etc. But I do think having an honest conversation about how rich a package is relative to the market – and the rationale behind being under market if that’s the case – is likely to improve engagement outcomes as opposed to demoralizing talent as the conventional wisdom (favoring black box comp management) suggests.

…The flip side of this is that companies need to be mindful of how policies that disparately impact populations will be received when socialized, though. Do you have a separate PTO/leave/bonus/employer match policy for your key contributors/HCEs/highest performing BU? There may be good reasons for it… but – even assuming no legal/compliance issues – rolling out any enhancements to total rewards that only benefit a fraction of one’s population in a less than thoughtful way can do more to harm engagement than making no changes to a policy at all. If it doesn’t benefit everyone, it’s important to think through talking points prior to rollout.

…So a few days ago I came across a Forbes article detailing a fascinating new after-tax 401(k) rollover rule. You can read the Forbes article (by Ashlea Ebeling) here, and also IRS guidance on the new rule here… but in summary the new rule allows high-earning super savers to potentially contribute up to $53,000 per year in earnings to a Roth-IRA account by taking advantage of employer 401(k) plans that allow for employee after-tax 401(k) contributions (beyond the $18,000 pre-tax 401/roth 401k limit) and allow in-service distributions.

^The overwhelming majority of employer plans do not allow after-tax 401(k) contributions – as far as I can tell this is because allowing such contributions would make it harder for an employer to pass its non-discrimination test, which states that the average contributions of highly compensated employees – defined as those earning more than $120k in 2015 – cannot exceed the average contributions of employees making less than this amount by greater than 2%. Some employers have workforce demographics that make this less of a potential issue than others, however (such as those made up of only HCEs or that have safe harbor plans), making such a plan option viable.

…Ultimately, even a high earner that had access to such a plan option would be well served to max out their $18,000 pre-tax 401/Roth(k) contributions and $5,500 traditional/Roth IRA contributions before taking advantage of the new IRS rule; this is because the former options all enjoy intrinsic tax relief, while after-tax 401(k) contributions need to be rolled over into an IRA via an in-service distribution (or at retirement) before a contributor can enjoy the same benefits. With that said, I think this is a really cool perk that a Company with the right workforce makeup could make available to attract top talent since it protects earnings from the capital gains taxes they would be subject to if invested in a non-IRA account.

Thoughts? As always, please share in the comments section below.

P.S. Someone just told me that this is also known as a Mega Backdoor Roth IRA, and another great blog post on it can be found here.

Due to rapid growth both in product delivery and geographically, Red Hat chose to competitively position the company through employee segmentation and rewards differentiation. 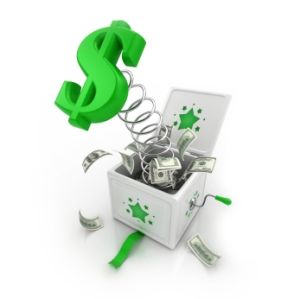 Check out this video on Total Reward Management by Ian Davidson.

Building on last week’s video here, Kerry Chou, CCP and Senior Practice Leader at World at Work, and compensation and benefits professional Alison Avalos discuss the ins and outs of pay for performance and how successful organizations are using it. Check our part two below:

Kerry Chou (CCP and Senior Practice Leader at World at Work) and compensation and benefits professional Alison Avalos the ins and outs of pay for performance and how organizations are using it in the first of a two-part video here.